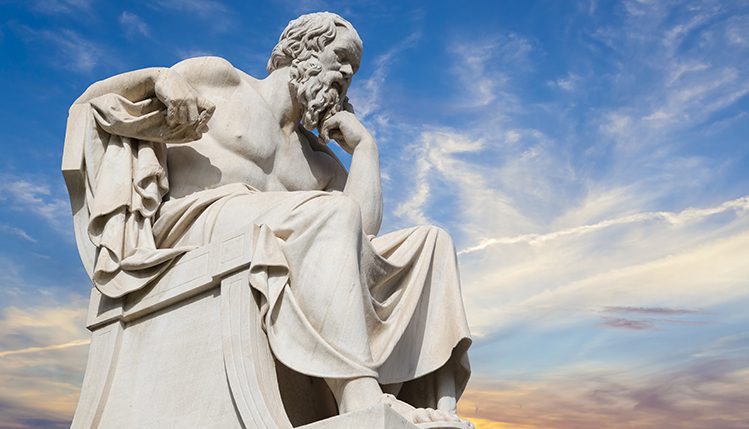 Hello & Welcome! Today we’re talking about Socratic Philosophy! Founded by “the father of philosophy” Socrates. If you’re new to the blog allow me to explain, I’m the pocket theologian and here I like to take a theological or philosophical idea and explain it as concisely as possible. Today’s topic is Socratic philosophy, so we will first breakdown its history context, which will be Socrates’ life. Then we’ll go over some misconceptions, before finally summarizing and finishing up.

Socrates was born in the ancient Greek city state of Athens, around 470 BC, now listeners you’ll remember from our Plato episode that a lot of the history about these ancient Greek philosophers is hazy at best. So take these dates with a grain of salt, especially in Socrates case, which we’ll return to in a moment. But for now Socrates was born to Sophroniscus and Phaenarete. Sophroniscus was a stone mason, Socrates was educated in this art by his father, and was a mason for several years before devoting his life to Philosophy.

Socrates also had a wife, named Xanthippe, who was called “undesirable” by some of Socrates critics, and three sons with hard to pronounce names.

Sources disagree about how Socrates supported himself after making the switch to philosophy, some sources say that he got paid for teaching, similar to Aristotle. However others say he deliberately chose not to get paid, in line with his philosophy, and several statements of socrates pointing to his poverty to prove his conviction.

Speaking of convictions, Socrates frequently mocked and challenged the Athenian elite, while some like Aristophanes, mad fun of Socrates back, others weren’t too keen. Socrates was accused of corrupting the Athenian youth, and chose to defend himself in court. In this trial Socrates, rather than claim to be falsely accused, claimed himself to be a gadfly, someone who challenges the status quo and those who support it. The jury wasn’t convinced and Socrates was deemed guilty.

A fun fact about the trial: Athenian law allows the condemned to purpose a secondary punishment, with the jury deciding if it happens or not. Socrates said that he should be honored for his contribution throughout all of Athens. Naturally the Jury wasn’t impressed and sentenced him to die by drinking poison Hemlock in 399 BC. Leaving a legacy and method that has lasted all these thousands of years.

But being so old and so famous, naturally Socrates was a little misunderstood, so let’s talk some Misconceptions:

1. That Socrates actually existed.
Unfortunately, a lot of the material we have talking about Socrates is from his students, and most of them depict him in debate with others. Debates that are more metaphorical than factual. This could lead some historians to deposit that Socrates never actually existed, but in fact was a creation of Plato and others. However there is no concrete evidence one way or the other, so I leave it up to you listeners.

2. That Socrates was only a thinker, not a fighter!
Socrates served as a hoplite, an armored fighter, since he was not born wealthy or a noble, this was essential and expected of him, Socrates served three campaigns in the first Peloponnesian War. At Delium, Amphipolis, and Potidaea. During one of these battles he saved Alcibiades a popular Athenian general. Socrates was known for his fearlessness and fortitude in battle, something that he became infamous for as a philosopher.

3. That Plato was the only disciple of Socrates.
Actually, another famous philosopher named Xenophon, was also a student and admirer of Socrates. Xenophon is also knows for beginning Stoic philosophy.

To fully surmise Socratic philosophy is no easy task. However it has several interesting parts. The first being that in Socrates mind, the first purpose of every man, or the primary desire he has is happiness, or fulfillment. To Socrates a person can achieve this by learning. For Socrates, the more a person knows, the better a person is. If you know a fire is hot, you won’t touch it, if you know a boulder is heavy you won’t hurt yourself lifting it and so on. Socrates main claim to fame is his “socratic method”, where Socrates believed the best way to learn things or to grow in knowing, is through discourse. By talking out your beliefs and growing in them.

Socrates believed that philosophy should be designed to produce practical results, not just spin one’s wheels or have good conversation. Good philosophy in Socrates eyes, should produce ethical and practical steps, Socrates, like many Greek philosophers (Plato especially) believed that the best leaders should be philosophers. Do any of you think that is true? Reach out and let me know.

Socrates most famous quote was: “The unexamined life, is not worth living”

Lastly I’d like to delight my readers with a quick joke:
What gym did Socrates go to?
Answer: The Y!

And that’s all I have for you on Socrates, go in peace!