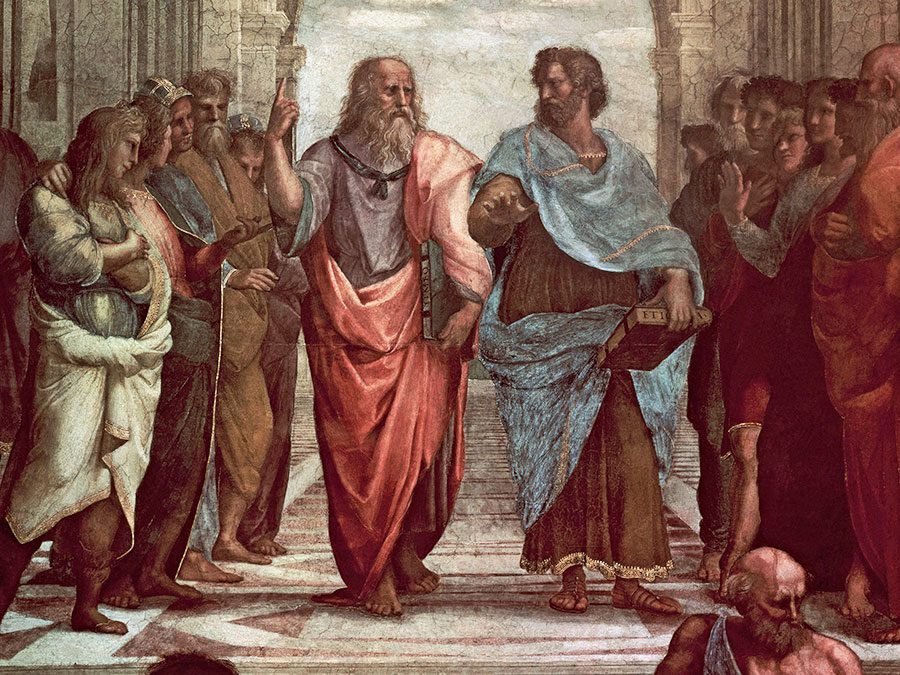 Hello & Welcome! Today we’re sharing about Plato. One of the most famous philosophers in history, also the namesake of a children recreational product. If you’re new allow me to explain, I’m the pocket theologian and here on the blog I like to explain different theological and philosophical ideas in a short, easy to understand format.

First I’ll discuss the history behind the philosophy, usually the philosophers life, and any particular reasons why they believe what they believe. Then I’ll explain their philosophies as three “pillars” before summarizing everything as best I can.

Without any further ado, let’s begin for discussion on Plato:
It is largely believed that Plato lived was born around 427-8 BC and died around 347-8 BC. However, accounts conflict, with different ancient historians giving different numbers. Like Diogenes, Eratosthenes and a few others. In regards to his early life things aren’t much better, however we do know that Plato’s parents names were Ariston and Perictone, and that he had two older brothers Glaucon and Adiementus, and a sister Potone. Thanks to Plato’s parents, he grew up in a very wealthy and politically active family in Athens. It is sometime in Plato’s early life that he is mentored by Socrates, the father of philosophy. After Socrates died, sometime when Plato was in his twenties, Plato left Athens and went on a tour of the greek world. Going as far as Egypt.

When Plato returned he founded a school of philosophy, a literal school, not a school of thought, rather famous named “The Academy” where Plato would spend the rest of his life. During Plato’s life he touched on a variety of topics: In his book “the republic”, Plato discusses government, in his work “the apology”, Plato viciously attacks Athenian culture

Fun Fact: His name isn’t Plato, it is Aristocles, with Plato being a nickname given to him for a few different reasons. Plato in greek means “broad” which could’ve come from Plato’s head, his physique, or his sense of style. Either way, history remember Aristocles as Plato.

Pillar 1: Theory of Forms
Plato’s most famous belief, best exemplified in his description of a cave in his work “the republic”. The way plato describes it, every man is inside a dark and damp cave. This is reality as normal man perceives it, but there is a mouth to the cave, where light shines through onto the wall where the man can see it. When someone or something walks up to that cave the man inside can see the shadow created on the wall. It is this shadow that helps the man to see what is at the mouth of the cave. Plato advocates that this physical reality is a world of forms, while the true reality exists elsewhere. And learning new information is merely remembering the true thing. For an example you can have the best cheeseburger you can have ever tasted, but through the good taste of that cheeseburger, you are reminded of the real cheeseburger in the real world.

This idea has inspired countless philosophers and theologians alike, for my religious listeners, Plato inspired Christianity greatly, with the gospel of John especially making note of a “true reality” and another world that gives meaning to this one.

Pillar 2: Dialogues
Most of Plato’s philosophy is drawn from his written works, except that Plato doesn’t say his own opinions. He makes his teacher, Socrates, do it. In these dialogues, frequently Socrates is challenged by someone or something and then has to defend it, some of the topics he covers are Ethics (The study of right and wrong), Political philosophy (what a government should or should not do), Moral Psycology (why people think some things are right and wrong) and so on. BUT, is it extremely important to acknowledge the idea that Plato believes that thought is discovered by two people, not one. Plato didn’t barricade himself alone thinking about things, he engaged with others and let their opinions change them. Or as he rather famously says “let your lover change you”.

Pillar 3: The Next Generation
Plato wasn’t the last philosopher to ever grace this planet, nor is he the last of “the big three” Greek philosophers (Socrates, Plato, Aristotle). In the famous painting by Raphael, selected as the image for this blog post, it depicts Plato pointing to the sky and Aristotle pointing to the ground. Which highlights the keen differences between these two great philosophers’ mentalities. You see, Aristotle believed that everything that matters is here in the physical world – that there is no world of forms as Plato tends to describes. Also, Plato made a point to create a school and teach his philosophy and ideals to others. More importantly Plato was okay with people disagreeing with him. Even his most famous pupil, Aristotle, completely disagreed with him in some crucial ways.

To summarize then, a good chunk of Plato’s philosophy as he developed it across his lifetime, by noticing a variety of belief systems, is that through experience we learn more about the another world. Plato’s “world of forms” was quite profound in his day, while thought to be more antiquated by more modern and practical philosophers of our day. However, it is interesting to note that Platonic philosophy was quite influential in Christian thinking in ancient Christendom. Consider John’s Gospel, for instance, where he speaks of the Word existing before the beginning of the world (which is likened to a platonic thought). But beware, if you put Christianity and Platonic philosophy together in one circle for too long they make gnosticism, which is a controversy that the church has had to deal with in it’s history before (quite messily, I might add).

And that’s all I have for you on Plato, go in peace!