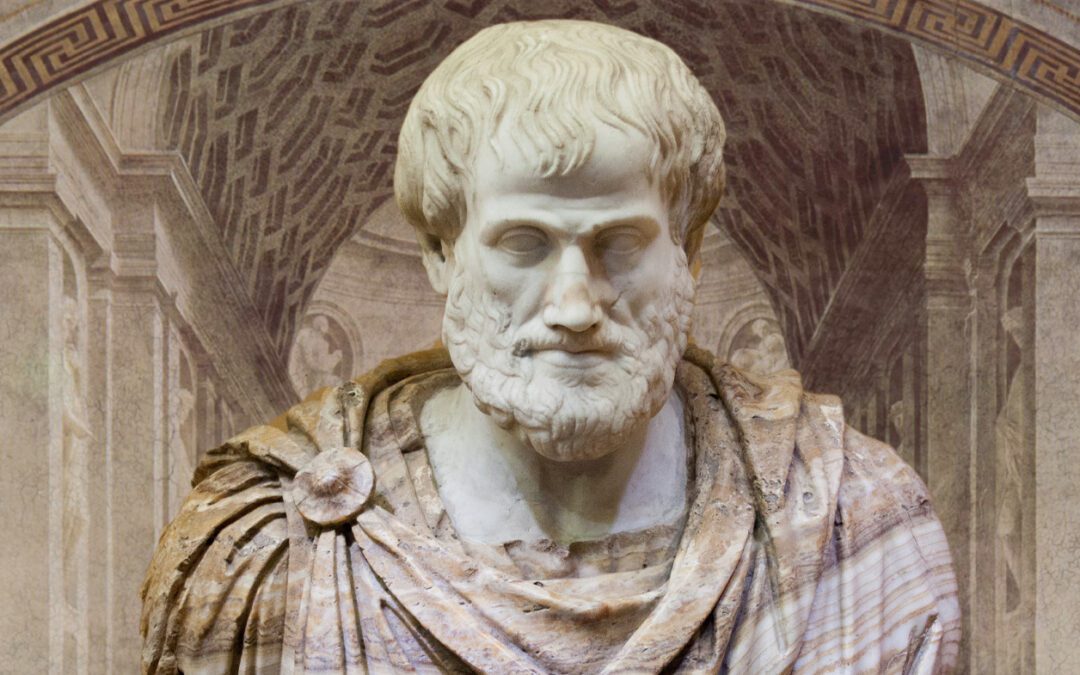 Hello & Welcome! Today we’re talking about Aristotle! The last of the big three Greek philosophers, the disciple of Plato, and a fervent scholar. If you’re new to the blog allow me to explain, I’m the pocket theologian and here I like to take a theological or philosophical concept and explain it as concisely as possible. In order to tackle today’s topic of Aristotelian philosophy, we will first breakdown historical context, namely how Aristotle’s philosophy developed and his life. Then we’ll go over some misconceptions, and one particular concept of his philosophy, before finally summarizing and finishing up. So let’s go ahead and get started.

Aristotle was born around 384 B.C. in Stagira, a small town on the northern coast of Greece that was once a seaport. He was the son of Nicomachus, who was court physician to the Macedonian King, Amyntas II. Unfortunately, though Nicomachus died when Aristotle was just a young boy. The Macedonian Court remained a major influence throughout the Aristotle’s life even partially contributing to his death, but we’ll get to that later. Not long after this, Aristotle’s mother, Phaestis also died, leaving young Aristotle an orphan, but not for long, since he soon came to stay with his sister and her husband. Who were to became Aristotle’s guardians.

Aristotle remained in their house until he turned 17, and from there his guardians sent him to Athens, the cultural and educational powerhouse of Greece, to pursue a higher education. Not long after landing there, Aristotle made a choice that would be one of many to define the rest of his life, he enrolled in the new school for philosophy. Maybe you’ve heard of it? The Academy! Established by Plato himself. Aristotle landed there during Plato’s lifetime and remained in close association with both Plato and the school until Plato died in 347 BC. After Plato’s death, Aristotle wondered what was next for him, but any uncertainty soon was settled when Aristotle’s friend Hermias, the King of Atarneus and Assos in Mysia, invited Aristotle to join his court as a teacher.

While in Mysia, Aristotle met his wife Phythias, the niece of his friend Hermias, and together they had a daughter. A couple years later in 338 BC, Aristotle was summoned to Macedonia to start personally tutoring King Phillip II’s son, who’s was nobody important. Maybe you’ve heard his name, Alexander the Great? Aristotle taught Alexander until he succeeded his father and began conquering, after which Aristotle left and returned to Athens.

Aristotle would spend most of the rest of his life there. Unfortunately, for Aristotle, after Alexander’s death the Pro-Macedonian government was overthrown. Therefore, Aristotle had to flee to the island of Euboea, where he would spend the last year of his life. Aristotle died in 322 BC, after contracting a disease of the digestive organs.

Now on to some misconceptions related to Aristotelian philosophy:

1. That Aristotle took over the Academy from Plato.
No he disagreed with Plato too much! He founded the Lyceum, with permission from Alexander the Great, in Athens specifically to compete with the Academy. Now run by Xenocrates. A fun fact: Aristotle’s students were called “Peripatetics” which means “people who travel about” this is because Aristotle loved to walk around while lecturing, exhausting his poor students.

2. Aristotle was married only once.
Soon after his first wife’s death, Aristotle embarked on a romance with a woman named, Herpyllis. Who hailed from his hometown of Stagira. According to some historians, Herpyllis may have been Aristotle’s slave, granted to him by the Macedonia court. They presume that he eventually freed and married her. Regardless, it is known that Herpyllis bore Aristotle children, including one son named Nicomachus, after Aristotle’s father.

3. Aristotle was just a philosopher.
Actually Aristotole studied biology, math and other subjects. Aristotle wrote around 200 works! Unfortunately, though only around 30 have survived to the modern day. Some of his works are Poetics, Metaphysics, Politics, Rhetoric, Nicomachean Ethics, and Eduemian Ethics. The later two in this list were named after his son and father. Aristotle was an amazingly well versed teacher!

No conversation on Aristotle would be complete without dissecting perhaps his best known philosophical ideal, this one comes specifically in the sphere of ethics, or how a man should act. So Aristotle believed that the supreme good of man was the pursuit of happiness, basically that the best thing for a man is to pursue happiness. A man can do this by living a moral life, but Aristotle recognized that different people often don’t agree, so he developed what he called the “Golden Mean.” Which is basically a perfect zone between living in excess and living deficiently, taking into account an individuals needs and circumstances. For more on this, I’d recommend studying Aristotle’s virtues.

Aristotle was a man who constantly had challenges and hardships thrown at him, but took those hardships and used them to teach others about a whole host of subjects, forming the basis of many scientific and philosophical systems as we know them today.

And that’s all I have for you on Aristotle, go in peace!