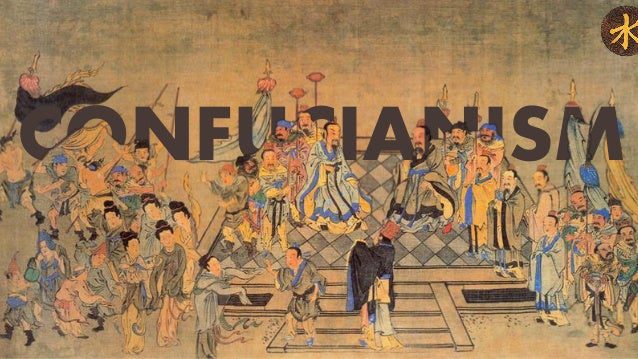 Hello & Welcome! Today we’re talking about confucianism! The eastern philosophy that focuses on morality. If your new to the blog allow me to explain, I’m the pocket theologian and here we like to take a theological or philosophical topic and talk about it in as much time as it takes to do it justice. Like I said we’re talking about Confucius, so let’s get started.

So what is Confucianism? Well Confucianism is obviously the philosophy of Confucius, who taught at length about the sanctity and value of ritual and family values. Much of what Confucian taught can definitely be categorized as a Conservative philosophy. While some philosophies, like the enlightenment philosophies, question old traditions and attempt to use Empiricism to justify them, Confucius on the other hand advocated for old ceremony’s and rituals. As far as I am aware, so far here at the Pocket Theologian, this is a distinctly foreign concept to the western world in the realm of philosophy. Which mostly seeks to question old traditions and old conceptions, while in the east it seems rather than ask the question, “why do we do this?” they instead ask “Why wouldn’t we do this?” I’ll explain this more as we carry on, but I did want to introduce the idea of eastern philosophy so far being much more conservative and traditional than western philosophy up to this point.

Let’s talk some history… So Confucius was probably born on September 28, in 551 BC in China, specifically the district of Zou, which is near present day Qufu, in China. Obviously, his father Kong He, was an elderly commandant of the local garrison, their ancestry tracing back to the dukes of song in the Shang dynasty. Which were the prerecord of the current rulers. It’s largely believed that Confucius’ great grandfather migrated with the family from their home province in Song to the current province of Lu. Confucius however was not close to his father as he died when Confucius was only 3 years old, leaving him to be raised by his mother Yan Zhengzai. Which unfortunately meant that Confucius was raised in poverty. Meaning he did not have access to many of the schools that richer children did. He was however born into the class of Shi, between the aristocracy and common people. Which meant that Confucius was eligible for many government positions. He was educated at schools for commoners and was taught the “six arts” those being Rites, Music, Archery, Charioteering, Calligraphy, and Mathematics. Which later became a central part of Confucius teachings. Also, he may have been an apprentice to the Daoist master Lao Tzu, who may soon get his own episode here at the Pocket Theologian.

This however didn’t stop him from marrying a woman named Qiguan when he was 19 years old, and they not too long after had their first child, Kong Li. They later had two daughters, with one possibly dying as a child. Confucius began working different odd jobs for this period of his life. Working as a bookkeeper and a caretaker of sheep and horses. With the money he made from these jobs he was able to pay for his mother’s funeral when she died a few years later. Confucius was 23 when she passed; and he mourned for three years, as was the custom. Right here we can see why Confucius was so particular about what to do when a beloved family member dies. As he was particularly familiar with the topic.

However this marked a change in Confucius life, here is when he officially began to work in politics. He soon got a job as the “minister of law” under the Duke of Lu, basically the ruler of his home province. To my western audience this is like working for the governor of your home state. However he was fairly helpless here as the Duke was controlled and manipulated by three aristocratic houses who held his government hostage. Confucius attempted to gain some political footing in this period, his goal being to tear down the fortifications erected years before in order to let the Duke have power in his own province again. But he unfortunately did not succeed. After all this chaos was done, Confucius soon found himself frustrated with the Duke when, a neighboring Lord sent a gift to the Duke of 80 women and 100 horses. Causing the Duke to abandon his duties for 3 full days. So what little power and reforms Confucius was able to make were now slipping down the tubes again. So it was at this point that Confucius decided to leave, but he had to wait, so as not to disgrace the Duke. When a lesser issue of ceremonial rites came up, Confucius used it as an excuse to leave and soon he was on his way.

This begins the next period of Confucius life, where he wanders throughout China, teaching and picking up disciples as he goes. It’s believed he visited the lands of Key, Song, Zheng, Can, Chu, Qi, Chen, and Cai. Also, during this period, Confucius compiled perhaps his best known work: “The Analects”, which compile most of the great wisdom and sayings of Confucius and is one of out greatest sources of the original teachings of Confucianism. Now after this, according to ZuoZhuan, a chinese record of the period Confucius lived in. Confucius returned to the province of Lu, his home, when he was 68, at the invitation of the chief minister. During this period Confucius taught 72 or 77 disciples using another of his famous works the “Five Classics”. In addition to teaching philosophy, Confucius also took on an advisory role to the government of Lu, until the end of his life. Which unfortunately, was only a few years away, after the deaths of his son and favorite disciple, Confucius died of natural causes at the age of 72. He is buried in Kong Lin cemetery in the historical part of Qufu in the Shandong province.

Lao Tzu- the possible teacher of Confucius, and notable philosopher in his own right. Lao Tzu was the founder of Daoism, which is WAY too complicated to try and explain right now. But basically shares some ideals with Confucianism, such as humility in leadership, and a few other concepts. Confucius very much enjoyed and honored Lao Tzu, calling him a “wise old sage” or Dragon, which to the eastern world has a very different meaning that it does in the west.

Confucius- The guy we’re talking about! Confucius lived a long and interesting life. Much of his philosophy coming from his life experience and ideals. We can see very clearly how Confucius soon witnessed corruption in government that has been infamous throughout chinese history. I remember listening to a podcast talking about the three kingdoms period and how corruption was rampant then too. But Confucius saw a way to rid the government of this corruption, and really how to rid people of corruption. Through retaining to ceremony and ritual, to enjoying those you have around you, and so much more. I think a lot of people could stand to learn from Confucius.

An eerie similarity- so in “The Analects”, Confucius has many discussions with his disciples and followers. Now what does this sound like dear readers? That’s right, this sounds like a Socratic Dialogue. Now obviously Confucius never met Socrates or learned anything from him, but it is interesting that two separate people both came to the same conclusion of how best to exemplify and explain philosophy.

Ritual and Ceremony- So a big factor that Confucius worked hard to teach was the importance of ceremony and ritual. Now this may confuse western minds but allow me to explain. So in “The Analects”, Confucius was having a discussion with one of his disciples who said he didn’t want to offer up his sheep in a ceremony, to which Confucius replied, “you love the sheep, I love the ceremony” while this may be confusing what it means is that the ceremony is important and shouldn’t be assuaged or forgotten. Confucius believed that ceremony helps a person to know how to behave, and to quote a jewish man “it helps a man to know what is expected of him, and what God expects for him to do.” So basically this idea corresponds very closely to the idea of tradition in the west. And truly the thoughts aren’t that different.

Golden Rule- So my Christian audience will know the verse in Matthew 7:12 where Jesus says “Do unto others as you would have them to do you” well as it turns out Confucius said something remarkably similar over five centuries before. “Do not impose on others what you do not wish for yourself.” Not quite the same but very notable. Once again I am not saying that Jesus and Confucius traded notes, but I am saying that there perhaps is a larger concept at work, a moral law that everyone can clearly see that Jesus spelled out. Furthermore Confucius didn’t think this only extended to strangers, Confucius believed that a perhaps should act this way with their parents, their employers, and everyone. Leaders should be obeyed, parents should be respected and so on.

That his name is Confucius, it actually is not, that name is the latin version of his name. Given by the first Catholic missionaries to China. His actual name was Kǒng Fūzǐ and then Qiū Kǒng before finally being known at the end of his life as Zhòngní.

That Confucius advocated for complacency or blind obedience- this isn’t true. Confucius advocated for obedience, but not necessarily complacency. Take in mind he did leave his job, meaning he at least thought that he had the right or ability to do so. Moreover, Confucius believed that loyalty and respect were two way streets. Leadership need only be obeyed if it is good. And parents only honored if they are good, and so on and so forth.

That many of the faults of chinese society are his fault- Apparently several critics of ancient chinese society, such as the submissive role of women, and the corruption of leadership are blamed on Confucius cherry picking certain quotes of his and misrepresenting the context of his teachings. Well in my research none of these appear to be the case. Confucius was concerned with the family unit, and in one’s persona life, believing that if that is right than the rest of a persons life will naturally follow. While yes some of these issues were around in his day, and used his teachings to justify themselves. Just like we talked about in our heresy episode, just because it can say that, doesn’t mean that it does.

And that’s all I have for you on confucianism, go in peace!